Despite ongoing challenges in the labor sector, the month of May proved strong relative to job creation. As reported on MBSHighway, Home prices also soared in April. What’s more, Fed members made headlines last week. This newsletter focuses on mortgage news for June 2021. The highly anticipated Jobs Report from the Bureau of Labor Statistics (BLS) revealed the following:

Since the pandemic began, initial jobless claims hit their lowest level since COVID-19 first hit. The total finally fell below 400,000, as 385,000 unemployed workers submitted claims last week. In total, 15.4 million people still receive unemployment benefits, which is down 366,000 from the previous week. These improvements move us all in the right direction. However, real challenges remain for many families. For example, parents who lost access to important after-school programs and other childcare options feel the squeeze. 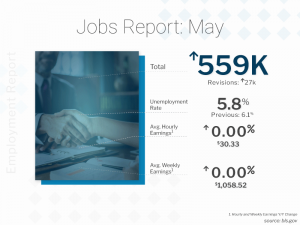 The Bureau of Labor Statistics (BLS) reported the creation of 559,000 jobs in May. Though this outperformed estimates and a weaker than the National Employment Report (ADP) report, it remains a strong number. In addition, slightly positive revisions were made to March and April (27,000 more jobs in two months, combined).

To put these numbers in perspective, consider there are 7.6 million fewer jobs now than pre-pandemic.

Note the fundamental difference between the two reports:

To further analyze these numbers, consider that the true Unemployment Rate is higher than the headline figure. That is because millions of people cannot look for work due to pandemic-related reasons. For this reason, the survey failed to count 2.5 million people who remain unemployed. When we add this into the calculations, the real Unemployment Rate is 7.2%.

In addition, people tend to misclassify people absent from work for other reasons. In many cases, they fail to mark those as unemployed (on temporary layoff). Without this error, the headline Unemployment Rate would have been 0.3% higher or 6.1%. What’s more, the real Unemployment Rate includes those unable to look for work due to pandemic reasons (estimated at 7.5%.) 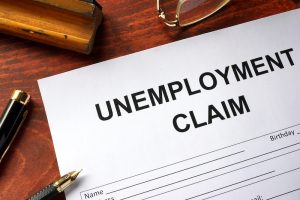 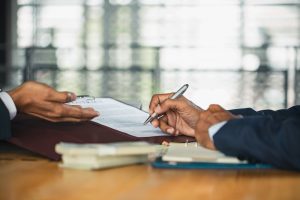 If you are interested in buying or selling property in or around San Dimas, California and the surrounding area, don’t get caught in a Catch 22 — owning two homes or none at all.  We list properties and advertise them to guarantee a swift sale for maximum profit. We also assist home buyers as they hunt for, make competitive offers, and purchase residential property. Realize your dream of homeownership, reduce your house payments to free up funds for whatever purpose you see fit. We offer the following refinance options: FHA Streamline, FHA Cash Out, FHA 203k, VA Streamline, VA Cash Out, Conventional, Commercial and Jumbo loans. Lock in your low rate today (213) 709-5178.